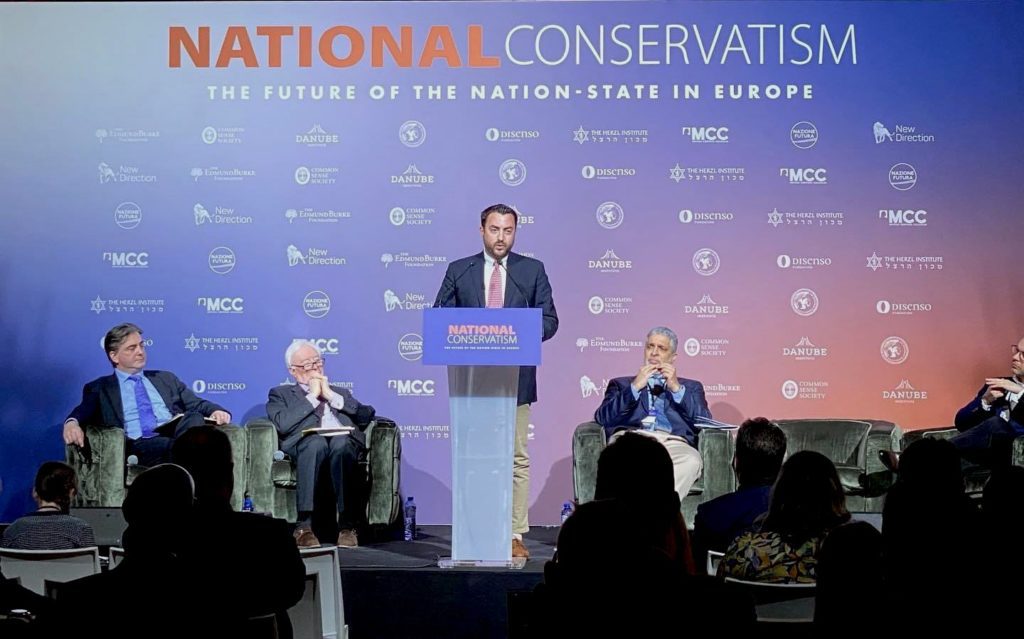 The liberal imperium’s impulses, born out of self-abnegation and self-hatred, have yielded much in the way of balkanization and civic strife. Mass migration and cultural dilution, zealously pursued as ends unto themselves, have not conduced to either human flourishing or the common good.

It has been too frequently asserted, usually blindly, that America is just an idea. Alternatively, we sometimes hear it formulated that American nationalism or patriotism merely amounts to fealty to America’s civic religion, the egalitarian and rationalist claims of the 1776 Declaration of Independence, with its emphasis “that all men are created equal, that they are endowed by their Creator with certain unalienable Rights, that among these are Life, Liberty and the pursuit of Happiness.” As someone who came of age through an American public school education, I certainly used to think that.

But as important as America’s animating spirit of 1776 has always been, the United States is much, much more than merely an idea. America, like any other nation, is also—or at least was—a common people with a shared culture, religious heritage, customs, norms, habits, and way of life. Consider what John Jay wrote in The Federalist No. 2, a seminal Founding era text, about America’s emergence as a cohesive people: “Providence has been pleased to give this one connected country to one united people—a people descended from the same ancestors, speaking the same language, professing the same religion, attached to the same principles of government, very similar in their manners and customs … fighting side by side throughout a long and bloody war.”

The age-old question of whether America represents an idea, on the one hand, or a concrete culture and people, on the other hand, therefore suggests a false dichotomy. The obvious answer is that America is—or at least was—both.

This was readily understood for most of American history. Through the turn of the 19th  century and into the early 20th century, as then-unprecedented immigration waves (including my own family) came in through Ellis Island in New York Harbor, America retained its dual sense of national identity. The Statue of Liberty, with Emma Lazarus’ poem “The New Colossus” prominently featured, greeted millions of new European migrants. There is no denying that the American idea was front, center, and visceral.

But immigrants who arrived during this time were also expected to promptly learn English and otherwise seamlessly assimilate into the American social and civic fabric. And crucially, recognizing the flood of immigrants who had just come to America’s shores over the past four decades, President Calvin Coolidge and Congress dramatically cut immigration levels in the early 1920s. It was readily understood that, after such a long period of high migration inflows, a cooling-off period was necessary.

But over the next few decades, the idea-based conception of American national identity triumphed. Perhaps this had to do with galvanizing domestic morale for either the World War II-era fight against fascism or the early Cold War-era fight against communism. Liberalism reigned supreme during this era; not coincidentally, this was the same time period, from the 1947 Supreme Court case of Everson v. Board of Education through the 1962 case of Engel v. Vitale, when public religiosity was first deprived of its constitutional legitimacy. In the realm of migration, the profoundly liberal Immigration and Nationality Act of 1965, which largely remains good law today, encapsulated the victory of the idea-based America. If America is solely an idea and lacks any kind of defining culture, language, customs, folkways, or mannerisms, then any restrictions on migration are necessarily arbitrary and capricious.

The modern European Union, and the modern European integration project in general, was similarly founded on certain core ideas: homogenization, universalism, openness, and inclusion. The EU imperative is to stamp out any local or parochial differences in the name of sameness, or oneness. In the context of migration, a core EU prerogative is to flood the Continent with migrants of alien cultural or religious backgrounds. Europe’s Christian heritage must be diluted with massive Islamic migration and with colorful inflows, more broadly, that better reflect the modern Left’s intersectional sensibilities. Just as in the United States, here in Europe the very notion of assimilation into a distinct national culture is shunned as a vestigial relic of a benighted, bygone era. For the liberal pro-EU mind, which abhors Europe’s putative legacy as oppressors and colonizers, the idea of assimilation is actually counterproductive—perhaps even evil.

The results, in both America and Europe, have not been good. The liberal imperium’s impulses, born out of self-abnegation and self-hatred, have yielded much in the way of balkanization and civic strife. Mass migration and cultural dilution, zealously pursued as ends unto themselves, have been carried out in reckless fashion. These policy imperatives have not conduced to either human flourishing or the common good of their respective American or European polities.

Western society’s pursuit of ultra-liberal migration policies, much like its pursuit of neoliberal trade policies, has surely redounded to the professional-managerial class’s needs. But the costs—both on a micro scale, in terms of tangible harms to individuals, and on a macro scale, in terms of the Westphalian nation-state order—have been staggering. A general Western zeitgeist of national self-flagellation has deluded many into thinking that to prioritize assimilation, something once taken for granted as an obvious condition of a successful migration policy, is tantamount to bigotry. Consider how in 2019, veteran NBC News personality Tom Brokaw was forced to profusely apologize for saying that Hispanic Americans should “work harder at assimilation.” I live in Miami, Florida, and it is simply true that many Latinos—as well as other immigrant demographic subgroups—do need to do a better job of learning English.

The rejection of assimilation as an obvious goal of a rational and sane immigration policy has naturally fostered its diametrical opposite: balkanization. If assimilation yields the proverbial ‘melting pot,’ then balkanization yields the proverbial ‘salad bowl.’ And from a national conservatism perspective, the ‘salad bowl’ is bad. In America, large swaths of the Sun Belt, the warmer and lower-taxed states that are gaining new citizens faster than anywhere else, have high proportions of urban populations where even second- and sometimes third-generation migrants do not learn to speak English.

In Europe, with the large-scale Islamic migration that metastasized under former German Chancellor Angela Merkel’s ham-fisted leadership, we have seen the rise of so-called ‘no-go zones.’ They’re right here in Brussels, too. My good friend Raheem Kassam, former chief adviser to Nigel Farage and an instrumental figure himself in the Brexit campaign, even wrote a book on this titled, No Go Zones: How Sharia Law Is Coming to a Neighborhood Near You. It is really quite ironic that, in an attempt to repent for her country’s past atrocities, Merkel emerged as the leading proponent of mass Islamic migration to the European continent—where, unassimilated and balkanized, the all-too-predictable result has been far too many Islamist terror attacks against Jews.

A similar structural feature that America and Europe share points toward one procedural path forward. We might think of American federalism, whereby the 50 states retain their own spheres of sovereignty separate from the national government, as very roughly analogous to the European nation-state model within the context of the EU or the Schengen Area.

Both U.S. states and European nation-states can exercise some sovereignty over their own borders. As the late Justice Antonin Scalia asked in dissent in the 2012 case of Arizona v. United States, “Are the sovereign States at the mercy of the Federal Executive’s refusal to enforce the Nation’s immigration laws?” The precise posture of the various EU nation-states is a bit different, but the overarching idea is the same: European nation-states can, and must, act within their own powers to secure their own borders and limit the insidious excesses of Brussels/Berlin-imposed open-ended migration. Hungary’s wall on its borders with Serbia and Croatia is a perfect example of what this looks like in practice.

Finally, a substantive migration-related idea, and it is a shockingly straightforward one, would be to dramatically limit raw migration numbers and codify into law a prioritization above all else of cultural assimilation—thus implicitly rejecting migration models, like ‘merit-based’ or ‘skill-based’ immigration, that are intellectually downstream of Davos-style neoliberalism. Japan, a country I have visited multiple times, would be an example of what this could look like in practice. Japanese immigration is severely limited, at least as it pertains to Japanese citizenship, to those who can demonstrate historic cultural ties to Japan. Israel’s “Law of Return” is one other possible example. Neither of these are perfect paradigms, and both have obvious downsides and logistical hurdles as possible broader-ranging role models. But both at least point toward the right path forward.

There is no panacea—no one-size-fits-all solution for a single approach to migration policy that will be best everywhere. But the point is that national conservatives must think more carefully about legal immigration in addition to illegal immigration, prioritizing above all the cultural and civic cohesion of the citizenry and the intergenerational durability of the Westphalian nation-state order as the best political vehicle for realizing human flourishing and securing the common good.